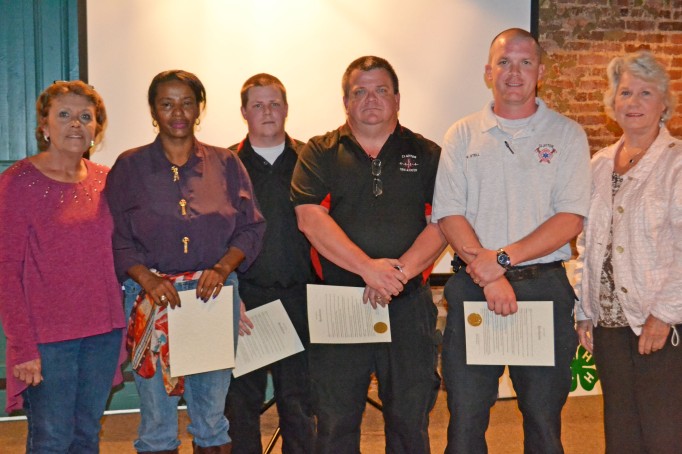 WHEREAS, Clayton’s Rescue Squad is a vital service provided to the citizens of Clayton and surrounding areas;
WHEREAS, the trained personnel who respond to emergency situations provide the health care needed in a professional and courtesy manner;
WHEREAS, even though duty calls them to respond to emergency situations any time of day or night and in all weather conditions, they are attentive to the needs of others;
WHEREAS, members of Clayton’s Rescue Squad continue to do their jobs to the best of their abilities without amenities and equipment many other squads are able to boast;
WHEREAS, groups of citizens in Clayton and surrounding areas have given of their time and talents to show their appreciation for the services provided by Clayton Rescue Squad by hosting fundraising events;
WHEREAS, all members of the Clayton Rescue Squad are to be commended for the outstanding professional service they provide to help others in need;
WHEREAS, on numerous occasions they have responded to calls that are life threatening one of which was a recent call to Clayton City Hall when a person suffered a major heart attack;
WHEREAS, while some may have thought their efforts were futile, Rescue Chief Paramedic Paul Gulledge, Sr, EMT Paul Gulledge, Jr. and EMT Wayne Stell never gave up on the patient;
WHEREAS, as a result of their efforts, LaCora Griffin has been released from the hospital and is a blessing to us today;
NOW, THEREFORE LET IT BE RESOLVED, that I, Rebecca Parish Beasley, mayor of the City of Clayton, extend the highest commendations to the members of the Clayton Rescue Squad for the services they render and express my appreciation to them for the dedication, professionalism, and loyalty they exemplify in providing emergency care to all the citizens of Clayton and the area. Done this 8th day of April, 2014.